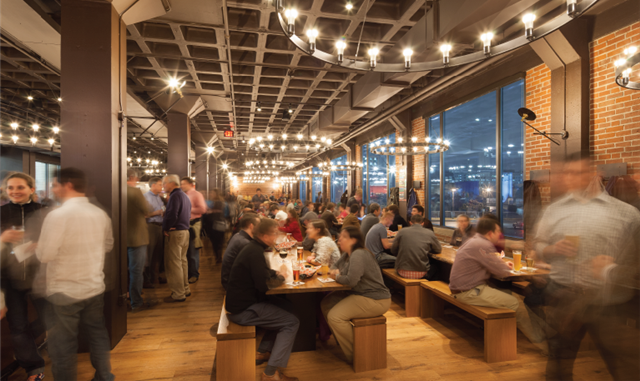 Seaport’s Stanley Szymczak is a Banquet Culinary Supervisor originally from New York. Stanley’s been with us for over nine years and, while he may not love our Red Sox, he is a big fan of Boston’s craft breweries. It seems like there are taps popping up all around the city, and Stanley is our local expert. Should you be in the hoppy mood, we have a few recommendations to quench your thirst. Herewith, a few of our favorites:

• Harpoon Brewery (306 Northern Ave., Boston): We have so many awesome breweries in the city, but the closest one to the hotel is Harpoon – it’s a must try. The team at Harpoon Brewery likes to say their brew is Boston’s real craft beer. The company has churned out beer from its Seaport warehouse just down Northern Avenue since the late 80s and has become a major community player with annual fundraisers. The European-style beer hall opened in 2013 and has 20 Harpoon brews on tap and beer pretzels.
• Trillium Brewery (369 Congress St., Boston): It may not be large, but the lines are long to get inside to grab a growler from Trillium’s Fort Point flagship, just blocks from the hotel. The neighborhood craft brewer opened in 2013 and has been a resounding success with beer snobs, er, aficionados around town. While the space doesn’t have a large tap room like Harpoon, we are told one is coming sometime this year. In the meantime, grab cans of Trillium’s signature IPAs and other brews to go.
• Dorchester Brewing Company (1250 Massachusetts Ave., Boston): Hop in an Uber and head to Dorchester for an afternoon with one of the neighborhood’s rapidly growing beer halls. A taproom has 20 beers waiting for you to sample, including six in-house drafts. The brewery also includes varieties from other local craft brewers who had been looking for brewing facilities. DBC also has pop-up food programs and events to keep you preoccupied even if beer isn’t your thing!
• Downeast Cider House (256 Marginal St. #32, East Boston): Hop aboard a water taxi in front of the hotel and head across Boston Harbor for an Eastie adventure. Downeast Cider House operates from a warehouse along the East Boston waterfront, where you can sample ciders on tap, take a tour of the brewing facilities, or just buy a growler to take home. Be sure to save time to enjoy the incredible views of downtown Boston from the Eastie shores, and also pop into KO Pies next door for Australian meat pies.
• Samuel Adams Brewery (30 Germania St., Boston): Some may argue whether the Samuel Adams brand is truly a craft brew these days, but if it’s good enough for the Red Sox (it’s now the official beer at Fenway Park), it’s good enough for us! Head to Jamaica Plain to see why the Samuel Adams name belongs to more than a Founding Father. This test brewery offers free tours to visitors interested in the backstory of one of the biggest craft breweries in America. Taste malts, smell hops, and (obviously) sample the product – even a few that haven’t shown up on the menu at your local watering hole!