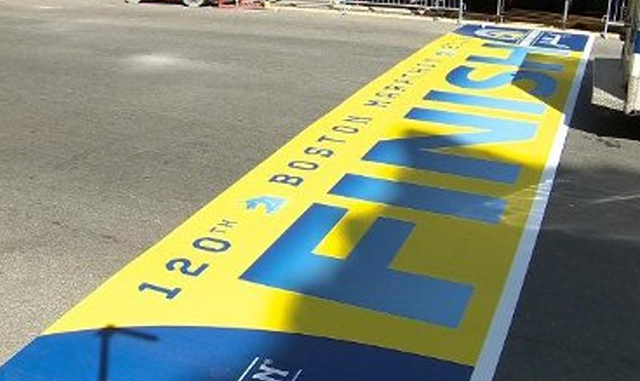 Fun Facts from the Finish Line!

The 120th Boston Marathon is about to deliver over half a million spectators along the 26.2 miles of streets from Hopkinton to Copley Square. You’ve trained your heart out and you know to carbo-load on pasta in the final days before the race, but you probably didn’t know that the only “winnings” offered for many years was a wreath woven from olive branches. Financial awards didn’t come until 1986 when corporate sponsorships led to cash prizes after professional athletes had refused to run without them. Today, both the male and female winner each take home $150,000—and an extra $25,000 if he or she sets a course record! We’re chock full of Boston Marathon trivia in honor of Boston’s favorite day of the year. Some of our favorites:

· It actually isn’t even called the Boston Marathon. Its official name is the Boston Athletic Association Marathon, and, when it began in 1897, it was referred to as “America’s Marathon.”

· It wasn’t until the 1990 race when the winners of the marathon were also Olympic marathon gold medalists (both the male and female winners that year had won gold in the 1988 Summer Olympics).

· Think you saw a famous face run by? You likely did! Natalie Morales, Lance Armstrong, Will Ferrell, and Valerie Bertinelli are among the many celebrities who have completed the Boston Marathon.

· Even though women weren’t even allowed to participate in the Boston Marathon until 1972, Kathrine Switzer was the first woman to receive a number to run in the race—in 1967! How? She entered the race under the name K.V. Switzer and wore baggy clothes to disguise herself. Race official Jock Semple attempted to physically remove her from the race, but her then-boyfriend blocked him and other officials, and Switzer went on to finish the race. Girl power!

· As runners pass through Wellesley, they would be wise to cover their ears: students at the all-girls school line up on either side of the course to holler in what is called the “Scream Tunnel.”

· Despite Heartbreak Hill’s infamy for breaking many a runner’s spirit at mile 20, it is actually the starting line in Hopkinton that is the highest point in the entire race—463 feet above sea level compared to Heartbreak Hill’s 263 feet.

Staying with us this weekend and looking for ways to prep for the race? Join us in the TAMO Loft on Sunday, April 17, from 6-8PM for an all-you-can-eat pasta buffet for $24 to rev up for race day. Dial In-Room Dining at ext. 4305 to pre-order a $10 Marathon Monday Grab & Go breakfast—available from 5-7AM, April 18 at Aura restaurant. Runners who are guests at the hotel are also invited on a first come, first serve basis to try a signature ShakeOut ™ massage from Spratt Muscular Therapies. For more information, please see the concierge desk or call ext. 4500. Happy running!