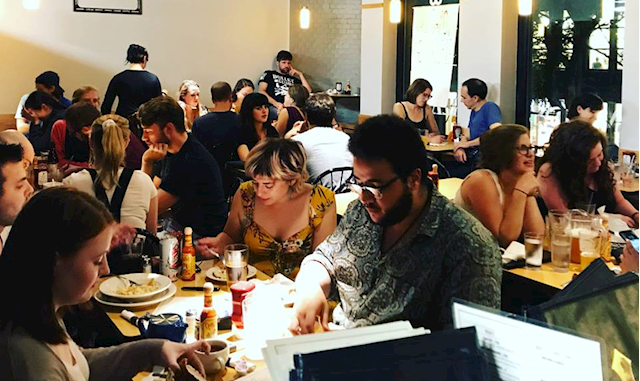 We’re voracious readers at Seaport, so it was a blow to us bookworms earlier this year when Trident Booksellers and Café, a popular independent bookshop on Newbury Street, closed for six months following damages it sustained in a fire. The flames were contained to an upstairs storage room, but the shop’s sprinkler system flooded the goods downstairs, and the owners needed time to repair and renovate. Loyal patrons were patient, and the wait paid off: Trident’s owners announced last week they were back in business.

The reopened shop has new bars, new flooring, new lighting and, yes, new copies of the 25,000 books that were damaged in the fire, the Boston Globe reports. The children’s books have been moved upstairs to give kids their own special section of the shop. Trident stood out over the years as an independent holdout that actually expanded when many of its peers struggled to survive in the era of Barnes & Noble and Amazon. It didn’t hurt that its delicious café menu was also a huge driver of traffic.

The owners say the revamped store will have an expanded offering of events, including murder mystery and trivia nights. Even if you’re just looking to peruse the shelves, the Trident is a great place to unwind during a busy day of Back Bay sightseeing to grab a cup of coffee and curl up with a classic.