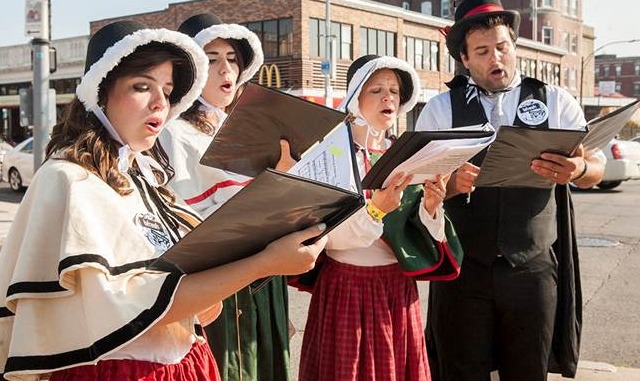 Have Yourself a Merry Allston Christmas

Every U-Haul and Zipcar in a 50-mile radius has been booked, the sidewalks are littered with old mattresses and spring semester's regret, and many parents need a drink. This can only mean one thing: it's time for a holly, jolly Allston Christmas! Boston real estate's cruel September 1 holiday of apartment lease turnover and students surging back to the Hub's many colleges guarantees the T will be packed and the shelves at Target will be empty. We've learned over the years that there isn't much one can do to avoid this storm; however, we at Seaport can offer up some of our favorite "shelters" to ride it out amid Boston's collegiate-heavy enclaves:
·         Fenway: The area around Fenway Park is rife with students from Northeastern University, but it is also increasingly stuffed with gourmet hotspots. Chef Tiffani Faison of Top Chef acclaim is the darling of Fenway with her Sweet Cheeks BBQ (1381 Boylston Street, Boston) and Tiger Mama (1363 Boylston Street, Boston). The two venues share the same building but not much else: Sweet Cheeks is the go-to spot in town for Southern BBQ while Tiger Mama offers Southeastern Asian fare. Whether you're looking for buttered biscuits and a cold one after lugging that couch up to a fourth-floor walkup or roaring to try spicy okra and crispy chili potatoes (both worth the sweat), Chef Faison is here to please your palate.
·         Chestnut Hill: The Street Chestnut Hill development has upped the ante for suburban dining, and there's no better place for nearby Boston College students to take Mom and Dad than the Cottage (47 Boylston Street, Chestnut Hill). The bright, open space feels more Marin County than Massachusetts, which might be a good thing when you're wanting to be anywhere but behind the wheel of a rental truck in rush hour traffic on Comm Ave. Its extensive seasonal menu is great for varied tastes and budgets while the Earth-toned décor (paired with a selection from the extensive wine list) will help quell your moving day anxiety.
·         Allston/Brighton: If you're in Allston/Brighton, bless your heart. You're in Allston Christmas Ground Zero, you're likely wanting to pull your hair out, and you're certainly going to need a beer that isn't coming out of your child's new kegerator. Look no further than Lulu's Allston (421 Cambridge Street, Allston) for the best draught list and brunch on the B Line. Start with the ranch tots, segue into the "white trash hash" for your main course, and wash it all down with a mimosa bucket for the table. You'll almost forget about the boxes waiting to be unpacked. Almost.
·         Kenmore: One bite in, and you'll want to have every meal at Eastern Standard (528 Commonwealth Avenue, Boston). Lucky for you, that's a possibility! No matter the time of day (minus the five hours between 2 and 7 in the morning used to clean and prep the kitchen), the renowned staff takes in weary souls and serves them a potent libation and delicious brasserie dish. This decade-old establishment is the perfect spot for Boston University parents to retreat to after a long day's move and toast on the popular patio to being empty nesters. On that note, make it a double.
·         Cambridge: Pat yourself on the back if your child is attending college at a certain crimson-hued university across the river. Congratulate yourself even more after you've "pahked the cah in Hahvahd yahd" and successfully settled him or her into campus living. Meander just a few blocks from the fabled statue of John Harvard to Alden and Harlow (40 Brattle Street, Cambridge) for Mediterranean small plates in a modern, subterranean space. You'll still be talking about the homemade chips and three-onion dip a month later (trust us), the secret burger is a nightly fight over who gets the last one, and, quite simply, you can't go wrong with anything here.  However, don't just take our word: Alden and Harlow just won Boston magazine's Best of Boston for Best Restaurant.