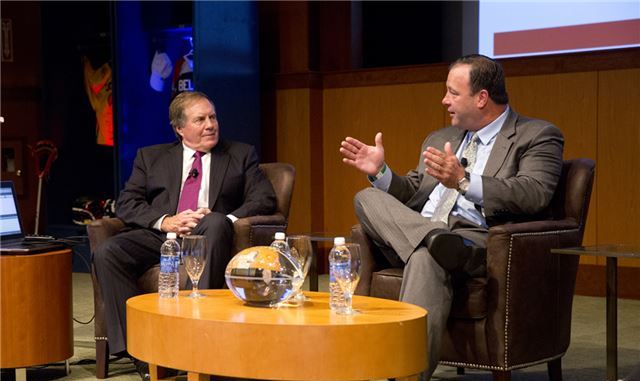 Bill Belichick may have had justified reasons for his sideline scowl while Jimmy Garoppolo hobbled off the field on Sunday, but that frown will be upside down when the famously stoic Patriots coach arrives at Seaport this Friday. The Bill Belichick Foundation will host its 3rd Annual Hall of Fame Huddle from 6:15PM until 9PM and includes a cocktail reception, program, and many VIP guests.

The organization strives to offer coaching, mentoring, and financial support to both individuals as well as entire communities and organizations. With a focus on football and lacrosse, the family behind the foundation hopes to instill their love of coaching, sports, and team building into future athletic leaders. Noticeably upbeat, Belichick told the Boston Globe in 2014 that reading applications for scholarships and slots in training camps hosted by his foundation were the “fun part” of his busy schedule.
You can help make these opportunities a continued success by picking up a ticket or two and making this Friday a Boston sports night you won’t forget! Special guests include former Patriots linebacker Jerod Mayo and Celtics coach Brad Stevens, and tickets remain for both regular admission and VIP. Huddle up!